In recent years, whilst the top runners have stuck with the concept of Long Slow Distance (LSD) – and slow is releative to your race speed – as part of their training for races especially like Comrades, however, the idea of spending hours out on the road for the “ordinary” runner, the runner who is going to get home between 9 and 12 hours simply doesn’t appeal and even at peak Comrades training time you’ll find many of the “ordinary” runners taking part in half marathon races rather than LSD and those who claim to do LSD are running 20 -25km and claiming that’s LSD.

The result is that LSD training has lost a lot of ground in recent years.  I was talking to a coach very recently who said that LSD should be present in every runner’s training whether fast or slow.  He went on to say that the latest research into polarised training (also known as 80/20 training) is that 80% is at extremely slow pace and 20% at maximal. It can’t make you slower  as was the original thinking. What it does is it saves you from being tired on the fast stuff all the time – these are the words of a coach and not my words and I stress once again that I am not a coach.

He went on to say that the “easy” runs that most follow are not easy enough and have a negative effect so to the average runner the message is clear. Get out there for Long Slow Distance and you’ll feel the difference.  OK! So you don’t get a medal at the end of it but it makes life so much easier in the longer term.

I’m delighted to see that almost every coach I hear talking and many clubs that organise club runs, are putting in long runs which are generally gentle and enjoyable and are not intended to be races.

When I last wrote about LSD, I spoke to a couple of top runners. Bruce Fordyce said that a long slow training run should be about an hour slower than would been a race over the same distance. 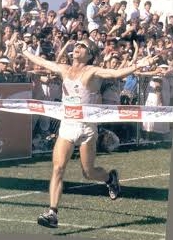 Bruce Fordyce in one of his 9 wins

This doesn’t really work too well if you are a 4:30 marathon person. An hour longer and it’s going to be a long day but I would think this would work well for anyone who is a 3:30 marathon runner and faster.

2018 women’s winner Ann Ashworth, when I asked her about long slow training runs felt that it can be measured if the running is at “conversation speed”.

This means that whilst you are out there on the road with others on a training run, you should be able to hold a comfortable conversation with your fellow runners.  If you can’t do that then you are in effect running at race speed.  This also works well if you are genuinely running at training pace and not race pace – some might say that in their opinion it’s the same thing.

So that takes care of the “slow” part of LSD but how far is the “long” part of  Long Slow distance?  I think this depends to a very large degree on what you’re training for.  If it’s a half marathon and that’s your limit there isn’t really any LSD involved in your training.  If you read the autobiography of that great Comrades man, the late Jackie Mekler, his idea of a long training run (and it probably wasn’t that slow as he was a top runner) was to go out on a Sunday morning and do the better part of 100km training runs.

I had the privilege of running many times with Dave Bagshaw in long slow runs and on those runs, Dave did run slowly and quite a few of those runs were with the Ian Jardine group I mention later and we did around 4 hours for our 32kms every week..  If you’re not sure who Dave Bagshaw is, he was the second man after Arthur Newton 40 years earlier, to win three Comrades in three successive years and most of that was on LSD.

Dave Bagshaw coming in to win his first Comrades in 1969

Incidentally, after Dave Bagshaw did his “hat trick” of wins only three more male runners have achieved that and just three female runners have done it.  You’ll find the details in my article titled COMRADES – “THE HAT TRICK CLUB”

If Comrades is what you have in mind, take the advice of your coach (if you have one) or of your club.  What generally happens is that many people start to look at qualifying for Comrades in November with races like the Kaapsehoop Marathon which many will tell you is not tough or the Soweto Marathon which,  whilst it is without doubt a great experience to take in the streets of South Africa’s biggest “township” is a very tough (and hot) race so be prepared. Almost certain that it’s unlikely to be your fastest marathon time.

Many people will tell you that Comrades training starts proper in March although many will have been running regularly at distances of 30kms before then but in March the distances slowly start to increase as you head towards April and that’s the big distance month.  I remember that the year I ran my best Comrades (it was only 8:29 which is not spectacular if you normally run silver or faster) during April I did about three runs of 50km or more and ended it up with a very long run over the first weekend of May.

I’ve heard some runners saying that they regard 15 or 20kms as LSD.  It really isn’t  because by April your long mid-week runs are often that distance.

Another mistake that many “would be” Comrades runners make is that during that crucial month of April they are running in half marathons as their long training runs.  If you’re running 20kms to get to the start of the half marathon and then the half marathon, that’s probably great but the half marathon itself is not going to be what you need on the second Sunday in June.  Remember that on that day you have 90kms to do and even if by some kind of miracle your legs are happy with short run training (even if it’s a race), there’s a good chance that somewhere around 60kms your head will start to tell your legs that its had enough.

If that happens, you’re in for a very long and probably painful last 30kms and 30kms after you’ve already done 60, is fairly heavy going

Some people enjoy the “camaraderie” in a race but try  spending the better part of anything up to 6 or 7 hours with a group of good mates whilst out on a long training run. It’s amazingly good fun and makes running very enjoyable.  I have many very fond memories of the days when I ran 32km every Sunday with the famous blind runner of the 1950s and 1960s, Ian Jardine and his group on part of the Comrades route.  We started at the top of Botha’s Hill and ran to what is now Inchanga Caravan Park and back and that was until the beginning of March when after that it was increased week by week.

LSD became part of my life for many years and I ran my best of 8:29 using the same method of training and my distances grew each Sunday as I felt myself getting stronger and stronger.

I mentioned training over the Comrades route as often as I could for my first 8 Comrades but I was fortunate to have lived near the route and got to know it extremely well and I also think that’s important and for that reason, I publish my detailed route description every year in the hopes that it will assist those who don’t have the good fortune to be able to train on the route itself.

In my first Comrades in 1968, I eventually reached the finish in 10:25 in around position 320 – something of a change from the position you would find yourself in today with a time of 10:25!

Coming in to finish my first Comrades in 10:25. Alone on the track!

One of the things of which I am still proud today were my splits for that first Comrades and I put that down firmly to LSD. First half 5:10 and second half 5:15. Whilst 10:25 can’t be regarded as a spectacular time by any stretch of the imagination, when I look at the way some runners today who battle to get to the finish in 12 hours really struggle, that 10:25 was OK.

Incidentally even my best run when I did my 8:29, my splits were pretty even because I had the strength to maintain my speed and for that I thank my LSD training.  I have always believed that is the key to Comrades. Get stronger both physically and mentally and that’s what I firmly believe LSD will do for you but you must do it properly.

One thing that is very difficult though, is to try to do LSD on your own.  I ran many long runs of up to 50kms on my own and it’s not easy.  I found that having friends around me and even if we heard the same jokes every weekend and laughed at those jokes every weekend, it was that, that made my running so very enjoyable.

Then of course, there’s the other aspect of it.  It’s a lot cheaper to do a long training run with friends using either shops or service stations to buy your drinks (or if you are fortunate enough to get your life partner to get out of bed and do the seconding) than it is to run in races every weekend that some people do.

Over the last couple of years, a few women runners I know have said that from a security point of view they would rather be in a race with lots of people around them than on a training run with just a few others.  I fully understand their concern and it’s for that reason that I say “hats off” to those clubs that are organising long and seconded  training runs over weekends.  It’s a huge job to do that and if your club is one of those doing that, support them. They deserve the accolades.

Get to understand the importance and the role of LSD and then go and thoroughly enjoy yourself doing them.

2 thoughts on “LSD – COME BACK ALL IS FORGIVEN”