If you can run and finish the Comrades Marathon within the time limit it’s always been regarded as a feat but, in my saying that to complete Comrades is a feat it could be regarded as something of an oxymoron when you consider that some time ago I wrote that Comrades isn’t hard.  So what on earth am I going on about then?

It’s been said many times by many people that if Comrades was easy then everyone would do it but when you consider the number of South Africans who could fall into the category to qualify to run Comrades and you compare it to the total number in the 94 editions of the race that we’ve had since it all started in 1921, the percentage is very small so what on earth am I on about when, on the one hand I say that it’s a special feat to run this race yet on the other hand, I say it’s not hard?

Allow me to try to explain before we look at some of what I think have been very special feats we’ve seen in this event over the years.

I don’t think that Comrades itself is hard and as always, I am talking to those who run between 9 and 12 hours because that’s what I know and that’s where I have been other than two of mine where I dipped under 9  hours and I’ve written previously that the hard part of Comrades is getting to the start.  The training is hard and you need to be both physically and mentally prepared and it’s that preparation that makes it a special feat to run and finish the 90km between Durban and Pietermaritzburg in decent condition.

The training takes extreme dedication over at least 6 months (and sometimes longer) and that’s the part that’s hard. That’s the part that makes it a special feat for anyone to finish this race. Race day itself to the ordinary runner who has trained properly is not hard. I always found it to be a great day in my runs, and “they” say it’s something every South African should do at least once and I totally agree but be careful because once it gets into your system, it’s very difficult to get rid of it. Certainly there can be times when you might have prepared properly and on race day you still come undone. It’s happened to me but I’m not alone. That’s when the mental training kicks in and gets you home but you go back the following year to “fix” it.

What I want to look at in this article, and this is not intended to take away anything from anyone who has run Comrades (and I’ve started and finished 14 of them) are the very special feats that have been achieved in this magical event over the years and it’s some of those I want to look at.

There have been some very special feats in Comrades, feats that in some way set themselves apart from the others and in looking at them, the one that immediately springs to mind has to be Bruce Fordyce. Eight wins in successive years, then a one year break before coming back to win his 9th, something that no other male runner has come anywhere near.

The closest to Bruce’s 9 wins was the 8 in the women’s race by Elena Nurgalieva, one of the famous Russian twins we got to know so well at Comrades.

Elena Nurgalieva during one of her 8 wins

Second to Bruce in the number of wins by men are 4 runners who have each won 5 Comrades. Arthur Newton in the 1920s, Hardy Ballington in the 1930s, Wally Hayward in the 1950s and Jackie Mekler in the 1960s.

Fordyce won his 6th Comrades to put himself ahead of all the others in 1986 and that was 33 years ago and since then nobody has come close to 5 wins let alone 9 of them. There have been a couple of 3 time winners since then but 3 is a long way short of 9!

Will we see any other runner achieve this? It’s always possible – anything is possible but if that happens it’s going to be a fairly long time away because 2019 was the start of the new “cycle” with both the winners in 2019 notching up their first wins and those few runners with 3 wins already before 2019 are going to have to work hard to better that to push those up to 4 and beyond.

Whilst Bruce and the 5 wins group had very special achievements there have been other “very special feats” at Comrades and it’s also some of those I want to look at briefly as well.

I’m going to start by going way back to the first few Comrades. The man whose name will go down in history is Bill Rowan, winner of the first Comrades in 1921. He did a time of 8:59 which by today’s standards is pretty slow but there is a medal named after him if any runner can break 9 hours (they were introduced after I ran my sub 9 races), and that medal is symbolic of the fact that they have run a time faster than the first winner. I wonder how many runners even realise that.

Was 8:59 a very special feat in 1921? When one considers that it had never been done before, and to win a footrace over 54 miles on roads like those they had to use which were dirt almost the entire way, one has to say it was a “Very Special Feat”.

That was the only Comrades that Bill Rowan ever won but that doesn’t matter because he will forever be remembered as the first winner. Rowan ran again in 1922 and finished 3rd after having travelled from what was then known as the Belgian Congo to get to Comrades.

What was so special about those early Comrades that, incidentally, had a 12 hour time limit for the first few years? Well firstly, most of the road between Pietermaritzburg and Durban was dirt. It was quite a long time before we saw tarred roads all the way from start to finish. That in itself must have been pretty tough running.

Take a look at photographs of the clothes they wore and at the shoes and you’ll understand why these were very special feats. 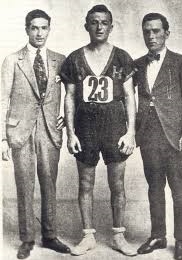 Bill Rowan running gear when he won in 1921

It’s not only Bill Rowan, the first winner of Comrades we need to salute. I wrote a blog some time ago in which I said that winning this race is no easy job although to the untrained eye it may look that way. The history of the race has literally dozens of names of runners who would dearly have loved to have been amongst those winners that some refer to as “The Winners’ Club” and some of those who didn’t quite manage it were exceptional runners in their own right but on the day, there was always someone better and membership of “The Winners’ Club” never came to them and many of those runners have been forgotten.

Amongst the men who have won, it’s a touch over 50 of them in total and 30 women have yet to win the women’s race.

Go through the list of 5 time gold medal winners who have their name and race number in perpetuity but don’t feature amongst the winners. Most people don’t have the slightest idea who they are, but having said that, to come away from Comrades with a gold medal is a very special feat.

Make no mistake, these were all very special feats, but what of those less known that could be called “very special feats”?   An example was the 1940 win by Allen Boyce who finished just under 2 hours ahead of the 2nd placed runner. It’s extremely unlikely we’ll ever see that again.

Those two gentlemen who were the first to break 6 hours are sadly no longer with us but they achieved very special feats with those first ever sub 6 hour runs. 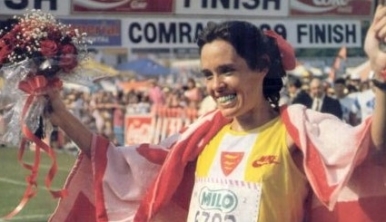 Alan Robb with his 4 wins was the first man under 5 hours 30 in 1978 and he finished some 19 minutes ahead of the second placed man. 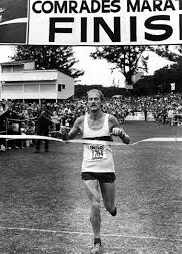 David Gatebe was the first, and at this stage, only man under 5 hours 20 and that was in 2016. Whilst Alan Robb’s 5 hours 30 has been broken again on both the Up and the Down runs, Gatebe’s 5:20 hasn’t yet been equalled, or bettered, in either direction and Gatebe himself hasn’t come close to that time again. 2016 just happened to be “his day”.

David Gatebe the only person to go sub 5:20 for the Down Run

As I said at the start, merely finishing Comrades is a feat but the performances I have outlined lift it a notch higher and allow me to include the words “Very special” in front of the word “Feats” and these are but a few of more I could mention.

There have been blind runners who have finished having to be led the entire distance either following something like a handkerchief tucked into the waistband of the shorts of the runner in front of the unsighted runner or a cord held between the blind runner and his “guide”. One of the best known unsighted runners was the Late Ian Jardine who was led mainly by Gerry Treloar,   Ian Jardine finished Comrades 14 times whilst unsighted.

Ian Jardine (left) being led by Gerry Treloar during a Comrades

We have seen runners having to crawl on all fours across the finishing line when their legs simply “gave in” when they were in sight of the finish line – and still finish in the gold medals.

Another very special feat was Tilda Tearle who won the race in 1993 but then went on to get a triple green number for finishing over 30 Comrades but there are also two men who have won and gone on to notch up a total of ridiculously high finishes. Alan Robb who was 4 time winner has a total of 42 medals to his credit whilst Bruce Fordyce has 30 in in his collection. 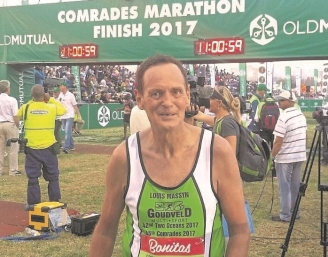 So whilst we salute each and every person who has completed Comrades within the time limit which is now 12 hours, as a feat, do yourself a huge favour and have a look at Comrades history if you want to add the “very special feats” to those of the ordinary runner.

But make no mistake, just to finish Comrades is a feat but train properly and run properly on race day, and it can be a great day out as well as a feat to brag about.

TEAM ASHWORTH COACHING »
« LSD – COME BACK ALL IS FORGIVEN