In 2015 Caroline Wostmann (pronounced Versed-man) shot to prominence when she became the first South African woman in 14 years to win Comrades and only the second South African woman to win Two Oceans and Comrades in the same year. She has an amazing story of a runner who started out as a very ordinary and average runner and became a “superstar” of Comrades.

I had never met Caroline prior to getting together for this chat and found a charming, down to earth and very together young lady who was easy to talk to and who had no airs and graces.

D.J.    How did it all start, your running career?

CW:    I battled to lose weight after the birth of my first baby. I was very unfit and      decided to attempt running as a means of weight loss. I started with a lap around my 800m block each morning and slowly built up from there.

DJ:      At what stage did you realise that you had that “special something” that would set you apart from the ordinary runner and take you into the category of the top runner where you are today?

CW:    I don’t think I ever thought that I had a “special something” but when I came 15th in 2012, I did think that if I trained harder I would be able to get into the top 10. I then overdid it and got a stress fracture and had to miss 2013 which definitely made me think I lacked the “special something” that the “elites” had!   Fortunately, I had a great doctor who referred me to biokineticists who helped me a great deal in getting strong enough to handle the hard training.

DJ:      In Comrades last year you seemed to be running to a time rather than against anybody else. Is that the way you ran Comrades and in fact Two Oceans last year?

CW:    Two Oceans was strange because I wasn’t trying to win it and I was just so comfortable and found myself in the lead and not in any discomfort at all and went on to a very comfortable win. In Comrades I was running to a time and my plan was to try to go into the lead around 20Kms from home but I was very surprised when I found myself alongside the leading ladies very early on and I was running with them but at a pace that was uncomfortably slow and so I moved away whilst I was able to do so and was comfortable with my pace right through to the finish. 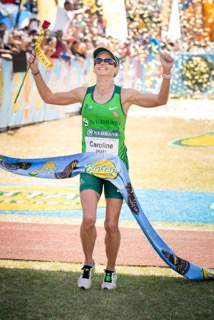 DJ:      Has winning Comrades changed you?

CW:    I don’t think it has. I’m still the same person I’ve always been with the same      priorities of family and if for any reason my training started to put strain on my family then I would put competitive running aside.

DJ:      Have people treated you differently since you won Comrades?

CW:    I find people are wanting to take a lot of “selfies” with me and I don’t mind that at all.

DJ:      What are your future goals in running?

CW:    For now, my attention is still on Comrades and concentrating on that. I have run a 2:44 marathon and I am not sure that the marathon distance is where I want to focus my attention right now. I feel more comfortable at the longer distance.

DJ:      What do you think you can get to time-wise in Comrades? Under 6 hours on the Down Run?

DJ:      In your build-up to Comrades 2015 it must have been very difficult balancing three jobs that of mother to your two daughters, lecturer at Wits and runner at the level you are at. How did you manage it?

CW:    I couldn’t possibly have done it if it hadn’t been for the enormous support I had from my family. My husband was amazing and he would handle everything at home as far as the children were concerned. I would leave home at around 4am to go through to Wits so that I could get my early morning training session in, then it would be my lectures and then after that back to Pretoria for my afternoon training session before getting back home for our family time where we sat down as a family before the children went off to bed. During that family time there was no television or anything like that. It was quality family time. It was only after Comrades that we took the decision as a family that I would stop lecturing at Wits and only focus on running so that took a lot of pressure off us all.

DJ:      Tell me about your decision to change running clubs

CW:    Towards the end of 2015 I heard rumours that KPMG was launching a running club. Being a chartered accountant I was naturally interested to find out more about this as KPMG is one of the largest and best firms in my profession. I found out that KPMG had been developing athletics in South Africa for the last three years through a project at Vorentoe  School called the KPMG Vorentoe Running Academy. I was amazed to discover that after such a short period of time they had managed to win 38 medals in the SA athletic and cross country championships in each of the previous two years. This enabled me to realise the extent of talent we have in our country. Being passionate about education and athletics I was eager to become a part of this initiative and was thrilled to be afforded the opportunity by KPMG. I have no doubt that future Olympians and world champs will come from this project and hope that other corporates will follow in KPMG’s footsteps in developing our country’s potential.

If anybody deserves success, it’s this lady. She has worked very hard to get to where she is now and we can only hope that it pays off for many years to come.