One dictionary definition of the word modest states “Moderate or limited in size” and whilst Comrades had started in 1921 and was very modest, it had many exciting tussles by those runners winning in those early days and we had the first three of the five time winners in Arthur Newton, Hardy Ballington and Wally Hayward all by the early fifties as well as the slowest winning time set by Bill Rowan in 8:59 when he won the first Comrades in 1921.

We’ve seen a couple of very close finishes. Phil Masterton-Smith beat Noel Burree by 2 seconds in 1931 and Manie Kuhn beat Tommy Malone (who had won in 1966), by just one second in 1967. The biggest winning margin was set by Allen Boyce by almost 2 hours in 1940 but it was really only in 1959 that the transformation to what we have today slowly started.

It was in 1959 that entries went to 100 for the first time and spectators at the finish to around 200.  It was also around that time that we started to see spectator interest from parts of South Africa other than the Durban and Pietermaritzburg areas of this “thing” held annually.

Runners had been travelling to Natal to take part in Comrades from the early days and there had been non Natal winners (Bill Rowan was the first one) but interest was fairly low.  The same spectators in small numbers came out every year to watch what was simply called “The Marathon” by locals.

It was the sixties when the changes really started to happen and by the end of that decade entries were up to 1000 although it was fairly lonely running at times.

I don’t remember exactly where this photograph was taken but it was during my first Comrades in 1968 and not too many other runners around me.

It was also in the sixties that we saw the first foreign runners in the form of a team of four Englishmen running for the Road Runners Club in England up against a South African team.  The fairly small band of Comrades supporters had always regarded Comrades as a South African owned event so it was a major dent to the ego when Englishman John Smith won the race. 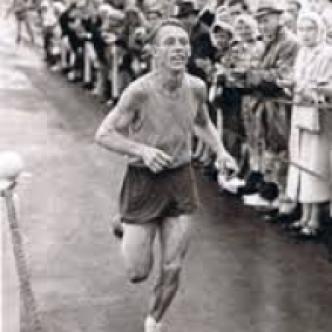 He led the rest of his English team to four of them in the top five with Jackie Mekler, the sole South African in the top five. Jackie himself told me years later that he misjudged that race very badly and ran like a novice and by that time he already had a couple of wins to his credit!

It wasn’t until the early seventies that interest from the UK was seen again when a team from Tipton Harriers arrived and against all odds, Mick Orton won the race beating Savages favourite Dave Bagshaw who had won the previous three races. 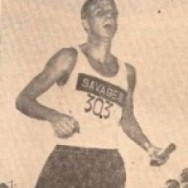 Orton was back again in 1973 to defend his title but failed dismally in his attempt to repeat his win, so Comrades became the property of South Africa again when Dave Levick was first home. Levick, from UCT, was also the first university student to win Comrades.

Orton, incidentally had something like an 11 minute lead going through Pinetown with about 20km left to run. He was caught and passed by Gordon Baker and with just a few Kms left it looked as though Baker was going to get that elusive win. He was in the lead and could virtually “smell” home but it was Levick who came through to win, leaving Gordon Baker with yet another gold medal to his collection. In 9 Comrades, Baker had 8 gold medals but was never able to achieve his dream of a winner’s medal.

Orton, after his 11 minute lead with about 20km to go, finished in 5th place.

The 50th Comrades in 1975 was certainly the year that changed everything.

The first thing that troubled the organisers was whether the “old road” could handle more than 1500 runners. It was (and still is) narrow and with seconds’ vehicles on the road, it was a major problem. Organisers limited the field to 1500 with the requirement that novices had to qualify with a marathon time of 3:30 or better. Interesting that we all thought we would have to qualify in under three and a half hours so most of us ran our best marathons at that time.  I ran my three best times when I thought I would have to qualify in under 3:30.

That wasn’t the only thing that happened in 1975. Organisers approached the SAAAU, the controlling body of athletics in South Africa at the time and after numerous discussions, the powers that be allowed Comrades to be open to all races instead of only white males between 18 and 65 as had been the case previously and also to women.

The one thing very few of us could understand and it still remains a mystery to me, is why black runners were required to wear ethnic tags denoting “Zulu” or “Xhosa”, etc.  An embarrassment to everybody.

Comrades survived the seventies and the second half of the decade saw the race dominated by Alan Robb who was the first person to finish the Down Run in under 5:30.

All the while the entries grew and at the end of the seventies the roads really were too busy, but there were no further limit on the number of runners, so only one other thing could be done.

Get rid of vehicles from the road and so we saw the introduction of refreshment stations and after a few years a total ban on motor vehicles except those with special permission to be there such as the media.

By this time TV was becoming firmly entrenched in South Africa and in the second half of the seventies, the SABC staged a race in central Johannesburg that was screened live and the numbers of runners started to explode as the sport sparked the imagination of “ordinary people” who took to the roads.

Then came the eighties and the Fordyce era and Bruce’s persona did a huge amount to swell the fields even more but as we were still in isolation the runners were all South African. 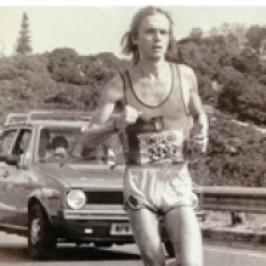 The early nineties saw the start of the political change in the country and in 1993, the German runner, Charly Doll took advantage, came to Comrades and won it.  1994 and American, Alberto Salazar did the same thing. 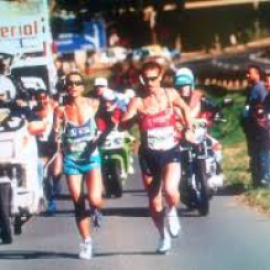 After that for a few years South Africans claimed the race back with wins by Shaun Mieklejohn in 1995 and Charl Matteus in 1997 but then came the late nineties and the wave of runners from Eastern Europe and particularly Russia dominated.

By the time 2000 arrived, Comrades had moved another step forward with the appointment of a woman, the late Alison West as Chairperson and marketing got under way for the 2000 Comrades.  The finish was moved to Scottsville racecourse in Pietermaritzburg to accommodate the numbers expected and numbers there were.

24,000 people entered “The Millennium Run” and at the same time the time limit for the race was increased to 12 hours to allow as many people as possible to finish and earn that precious medal.  Russia’s Vladimir Kotov won the 2000 event and the Russian dominance continued for years.

The race has continued to grow and for the 2019 race there have been 25,000 entrants. The entries sold out in 6 days, such is the popularity of Comrades now.  The 12 hour time limit has given the “ordinary” runner who could never have dreamt of running and finishing Comrades in the 11 hour time limit as it was previously, the opportunity to be part of it.

I’ve seen all but three Comrades Marathons since 1956 and I have watched the race grow and the changes taking place as we moved into the modern era of online entries, the Expo and highly professional refreshment stations providing virtually anything and everything a runner might want. That’s a far cry from the early days when runners had their own seconds and when those seconds were stuck in traffic jams which has always been the case on Comrades day.

I remember in my first Comrades in 1968, my second arranging to meet me in Westville for my first drink – if he could get there, but if not it would have to be in Pinetown.  20Kms to my first drink but I didn’t think anything of it. That’s the way things were then.

We have seen the time for the first Comrades which was a Down Run, won in 8 hours 59 minutes to the fastest time for the Down Run set in 2016 by David Gatebe in 5:18:19 and that’s going to take some beating.

That’s an indication of the way the race has changed and grown.

Comrades has certainly gone from “Modest to Mega” but was it better back then when things were a lot more “personal” because of the size of the fields or is it better now?  The answer to that is easy.

Yes it is – and the reason I answer that way is because each Comrades is unique. Each with its own stories of the heroes and heroines who win and the “gladiators” who finish a lot further back.

We look forward eagerly to the 2021 race which will celebrate the 100th anniversary of the first Comrades in 1921, but that’s not the only thing we have to look forward to.  2025 will be the 100th running of this amazing “happening” (the race wasn’t run during the Second World War) that we call the Comrades Marathon.

A “happening” because for the vast majority of the runners it isn’t a race against anyone else. They race against themselves and the clock and it matters not where anyone else finishes. The average runner leaves the racing to the fantastic runners up at the front. Those who re-write the history books every year.

For the rest of the field, it is an event that is much more than just another road race. In many instances it’s a life changing experience that can’t be explained to anyone who has never run it.

For the last 5 years Comrades has been in the hands of its Race Director Rowyn James who has done a fine job with this very special event.

The advantage that Rowyn has is that he is a 15 time finisher of the race himself and he knows what the runners want from every facet of Comrades.

They train for months and complete hundreds of kilometres in training and in races just so that they can go home with that precious medal.

That’s the “happening” that’s gone from “Modest to Mega in the last 100 years.

2 thoughts on “COMRADES – MODEST TO MEGA”