Tommy Malone was a young man when he came to South Africa in 1962 and he answered the call of the Comrades Marathon four years later. He wasn’t really known beyond the running world in what was then the Transvaal and a few runners in Natal but it wasn’t very long before the diminutive runner from Coatbridge between Glasgow and Stirling in Scotland soon became known as the “Flying Scot”.

It’s 50 years ago exactly since Tommy Malone won his Comrades Marathon as a novice so what better time than to chat to Tommy about that day on the 31st of May 1966 and the lead up to it.

DJ:      When did you first start running and what was it that attracted you to Comrades?

TM:     When I was 16 I started all disciplines in school and I developed a liking for cross country. I came to South Africa in 1962 and in the 1963/64 cross country season won 13 from 15 events at inter club events and then made South African team in 1964 and ran against then Rhodesia in Bulawayo.

I read everything possible about running and eventually started following Jackie Mekler’s career after his second place to Scotland’s Joe McGhee in the 1954 Empire Games Marathon. I had been in touch by letter with Joe McGhee while I was still in Scotland but when I came to South Africa I decided to try to get in touch with Jackie Mekler which I did and I met up with him and I have been friends with Jackie ever since, over 50 years now. Obviously with my interest in Jackie’s career and then getting to know him and getting into road running Comrades was always going to follow, and it did.

DJ:      Despite a fair degree of success in races in the 5 months leading up to Comrades 1966 starting with the Magic Trophy in Pietermaritzburg you were relatively unknown to the general public prior to Comrades 1966 where you came in as a novice. Tell us about your race successes in the first half of that year.

TM:     I went down to Pietermaritzburg in January for the Magic Trophy which was a very tough 32Km and I won that and after the race Manie Kuhn came up to me and introduced himself and said that he had heard through the grapevine that I was thinking of running Comrades and that if that was true he had a friend in Johannesburg who would be happy to come round and break my legs. That was the start of a lifelong friendship with Manie despite many fierce battles on the road. He was a good man and I still miss the many laughs we shared whenever we got together.

In 1966 and prior to Comrades,  I also ran the SA Marathon Champs in Bloemfontein and despite not being 100% well I managed to finish in third place there. And then six weeks before Comrades I ran in, and won the Korkie that used to be run from Centurion to Germiston and in that race I broke Jackie Mekler’s record.

DJ:      Apart from the races what sort of training did you do and did you turn to anyone for advice on Comrades

TM:     I logged 6 months from 1 Dec and did 3200kms as Comrades training in that period including races. I ran 7 days a week and sometimes twice a day. My long training runs were 30Km, 56Km and one 64Km and a lot of it alone. I did do a few runs with 1957 winner Mercer Davies. One strange thing though was that despite my very long friendship with him I never ran any training runs with Jackie nor went to him for race advice that I can remember.

DJ:      The field was small in those days – probably not much bigger than around 500. What was your strategy from the start?

TM:     I approached it with caution. I had no pre race strategy and decided to rely on how I felt on the day. I was acutely aware of the fact that I was the novice and that I was surrounded by experienced Comrades runners and at a function the day before the race, one of the pre race favourites, Frikkie Steyn made no secret of the fact that he was going to win in 1966. He actually never won Comrades although he was a Gold medallist. I was also very aware of Manie Kuhn and his Comrades credentials and the fact that these guys all knew the route well and trained on it so I decided that I would go out in a group with them.

DJ:      You ended up with a very big gap between you and second placed Manie Kuhn at the finish – some 18 minutes. When did you start to make your move and when did you realise that the race was yours?

TM:     At around Bothas Hill, I was around 5th about 2 minutes off the pace and saw Jackie Mekler who was standing at the side of the road and said “Keep it going Tommy the race is still young”. I could never in my wildest dreams imagine that the man who had finished second to Joe McGhee at the Empire Games in 1954 and at that stage four time winner of Comrades (he would still go on to win it again) would be standing at the side of the road encouraging me.

At Harrison Flats my second said to me “Do you want anything”? and my reply was “I want Manie Kuhn”. Manie had at that stage led the entire way and I had made my way up to 2nd place.

By the time we reached Camperdown I had caught him. I didn’t bother to slow down or to say anything to him as I passed him and there was no exchange of any sort between us. I eventually reached the downhill section towards the Tumble Inn and a spectator on a motorcycle came up alongside and my second asked him where Kuhn was and we were told that he was about 4Km behind. That meant that in some 12Km I had moved 4Km ahead and I hadn’t increased my pace so Manie was in trouble. 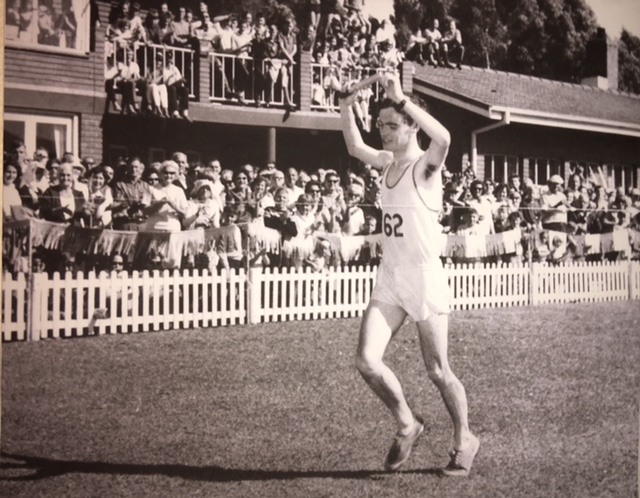 DJ:      It must have been fairly lonely running out there – particularly with the size field and being an up run with few spectators until you actually got into Pietermaritzburg.

TM:     Not through the towns. There were lots of spectators there but between towns very little in the way of people. There was one amusing incident that happened although it wasn’t very amusing at the time. I was running up Polly’s and as I didn’t want to run on the camber of the road I moved to the centre of the road and anybody who has run Comrades will know that the camber on Polly’s is severe, when an over enthusiastic marshall came rushing up to me, finger wagging and told me that if I didn’t move to the edge of the road and run facing the traffic he would immediately disqualify me!

I immediately moved to the side of the road and when I got to the top of Polly’s I was met by two motorcycle traffic policemen from Pietermaritzburg who then escorted me whilst I ran – in the middle of the road – to the finish!

DJ:      You had two competitive Comrades and then you didn’t run Comrades for some four years before coming back to complete your remaining 8 Comrades for your Green number. Whilst you ran all of those in silvers what many people don’t know is that it was injury that took you out of competitive running.

TM:     Sadly yes. Both my Achilles Tendons gave in after the 1967 Comrades and I couldn’t run Comrades again for 4 years and then when I did come back it was a case of hobble more than run the way I used to run but I have still been involved with running in many ways since then.

DJ:      Looking back over those 50 years since your win in 1966, you must have seen massive changes to Comrades. You come back virtually every year.  The attraction is obviously still huge to be at Comrades.

TM:     I’m coming up for my 50th Comrades that I’ll be attending this year and it’s the meeting up with old mates and seeing people like Jackie Mekler and Mick Winn and others and swapping Comrades “war stories” from years gone by is really great and that’s what’ll keep me going for as long as I’m able to do so.

There are always less published stories about Comrades and the one from Tommy’s Comrades win is fantastic.

Sitting in faraway Scotland, his Mum, Elizabeth, was biting her nails wanting to know what was happening to Tommy in this road race at the southern tip of Africa and she had an idea. She picked up the phone and called the Glasgow Herald and got through to the Sports Desk. The call we’re told went like this.

“I wonder if you could help me please. My son was running this race in South Africa today…………

You must be Mrs Malone! Tommy won the Comrades Marathon today”.