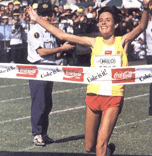 SINCERE THANKS TO THE COMRADES MARATHON ASSOCIATION FOR THE PHOTOGRAPHS

It was in 1975 during the running of the Golden Jubilee Comrades that women were permitted to run officially for the first time and since then we’ve seen some fantastic performances.

Before we move forward from 1975, let’s first go back to the days when women were not permitted to run officially but some ran as unofficial competitors. One small thing though before we move onto the stories, you will notice that the heading of this article refers to “ladies”.   Many years ago when I was still a radio reporter covering road races around South Africa and a couple in Europe, I referred to the “ladies” and I was severely taken to task and told in no uncertain terms by a race official (can’t remember who it was) who said to me that there were no ladies in any road races and that they were women.

Women were running and I should stop referring to anything other than women. I did have a major problem with that as I had been using the term “ladies” for quite a few years and even in this article I keep swapping between “women” and “ladies

The first woman to finish Comrades – in an unofficial run – was Frances Hayward in 1923. It was the third running of Comrades and the second Down Run. She took 11:35:28 seconds to do the distance and she managed an unofficial 28th position of the 30 men who finished. “After the race, Miss Hayward said:

It seems that nothing much has changed since then in terms of those last 16km!

The difference then is that the route between Pietermaritzburg and Durban was almost all dirt road!

1928 saw the time limit lowered to 11 hours (it had previously been 12 hours) and it stayed at 11 hours for many years only changing for the first time in 2000 to 12 hours.  It then went back to 11 hours for two years but was soon changed again to 12 hours where it remains today.

It was almost 10 years before we saw a woman completing Comrades in both directions when Geraldine Watson was the first woman to do this.  She won the Down Run in 1931 and then the Up Run from Durban to Pietermaritzburg 1932 and was then back again for the Down Run in 1933 when she ran her best time of 9:31. I can’t find any record that she ran again after 1933.

For many years The Geraldine Watson Trophy was awarded to the last runner home in the time limit.

After Geraldine Watson it was a fairly long time before we saw women running again as they were still unofficial. I remember Maureen Holland, with whom I did a fair amount of running in the late 60s and early 70s, being the first woman home in three consecutive years but not recognised because she was still unofficial.

Interesting that for quite a while she was reflected in the results on the Comrades website but her name has since been removed as all her runs were prior to women being allowed to run officially.

In 1975, Comrades organisers approached the controlling body of athletics in South Africa to have the race open to all people irrespective of race or sex. I was a member of Collegians Harriers at the time and Collegians were the custodians od Comrades before the formation of the CMA and the heated arguments at the Harriers AGM about whether the approach to the controlling body should be made. Eventually sanity prevailed and permission for the race to be open was given.

Two women started although the first woman home that year was declared to be unofficial after a problem with her entry. That year, novices had to qualify in a marathon in under 3 hours 30 and there was something wrong with the qualifying. Whether she didn’t qualify or not I don’t remember. Elizabeth Cavanagh finished in 10:08:00 and goes down in the record books as the first official women’s winner.

From 1976 to 1978 it was Lettie van Zyl who won three in succession.  In 1977, she broke the Up Run time set two years before and then set a best time (record) for the Down Run in 1978, the year incidentally, that Alan Robb became the first runner to finish Comrades in under 5 hours 30 minutes.

Two years later in 1980 on the Down Run and we had started to see bigger fields, it was Isavel Roche-Kelly after whom the women’s medal introduced in 2019 is named who set a new best women’s down run time of 07:18:00 and in doing that was the first woman to earn a silver medal (no gold medal for the winner at that time) for finishing in a time under 7hr 30min.

Isavel won again in 1981, this time in 6:44:35, the first woman under 7 hours. Sadly Isavel was killed in a cycling accident in Ireland soon after this.

The interesting winner of the ladies race in 1982, was Cheryl Winn, the last lady to get a silver for winning and who many years later went on to become the Chairperson of the Comrades Marathon Association, the first time that the winner of either the men’s race or the women’s race achieved the distinction of being elected as Chair of Comrades.

In 1988 we saw Frith van der Merwe home first in 6:32:56, a new best time but the best was yet to come for Frith because in 1989 history was made for the ladies when Frith ran the first sub six-hour women’s Down Run in a record time of 05:54:43 to finish in 15th position overall. That time still stands as the best Down Run by a woman 40 years later. Frith went on to win three times in total but they weren’t in successive years. 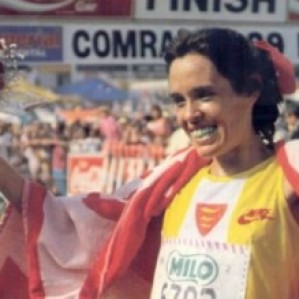 In 1991 Frith was again on the winner’s podium for the last time when she came home in 6:08:19, the second fastest Down Run time by a woman after her own run two years earlier. In 1997, Ann Trason, the America runner was the second woman to go under 6 hours on the Down Run with her 5:58:25.

It was the Russian twins, Elena and Olesya Nurgalieva, however, who captured the imagination of the running world and the public and still today people ask if “the twins” are running. Elena won a total of 8 Comrades while her sister managed 1st place in 2007 and 2009 but several 2nd place finishes behind her sister.

By the time we got to the “Twenty-teens” we started to see South African women dominating Comrades once again after a spate of foreign, mainly Russian, winners in the 1990s and early “noughties”.

The first of the “good” Up Run times by a South African was in 2015 when Caroline Wostmann ran 6:12:22 to win comfortably although that was almost exactly three minutes slower than the best Up Run time set by Elena Nurgalieva. It was 9 years before Elena’s time for the Up Run was improved by Caroline from the 6:09:24 the Russian had run in 2006. 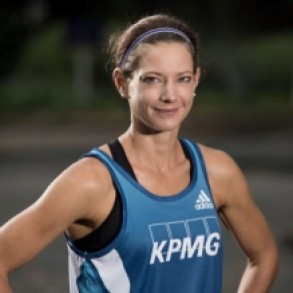 This gave the lady in second place, Charne Bosman the opportunity to pass Caroline to take the win in 6:25:55, so two South African lady winners in two years.  Charne, incidentally has been a women’s gold medallist every year that she’s run the race since her first Comrades in 2013. 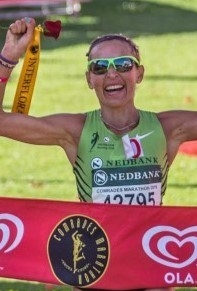 In 2017 it was the American distance runner, Camille Heron who won in 6:27:35, not an especially fast time given that the previous Up Run in 2015 had been 6:12 but Camille had led the race from start to finish and was some 4 minutes ahead of second placed Alexandra Morozova, the Russian runner.

In 2018 it was the turn of Ann Ashworth who was home first in 35th position overall in a time of 6:10:04 and that was on the longer Down Run route with a new finish at the Moses Mabida Stadium in Durban. This time it was close to 91km and the third longest Comrades in the history of the race.

ANN ASHWORTH NEARING THE FINISH IN 2018

Some 5 minutes behind Ann in second place was Gerda Steyn who had been the pre-race favourite in many circles for the 2018 Comrades but nobody had taken much notice of Ann in the build up to Comrades when she deliberately kept a low profile.

Gerda’s turn to make history was still to come and she didn’t have to wait too long.

It came in 2019 when she was the first woman to get home on the Up Run in under 6 hours, running a 5:58:53 and finishing in 17th place overall. She ran a near perfect race to take that win. I had the opportunity to chat to Gerda after the race and you could be forgiven for thinking she hadn’t run at all. That’s how fit she was and an indication of what a brilliant run she had. 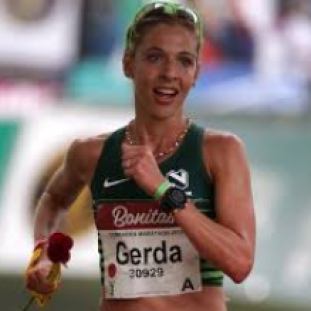 It’s not only the ladies themselves where the interest lies because the Comrades medals won by women has an interesting history too.

When women first ran officially from 1975 they could only earn a bronze medal but that had all changed by the time Frith van der Merwe ran that brilliant Down Run in 1989.

From 1979 to 1982 a Silver Medal was awarded to the 1st Woman (the last winner to get silver was Cheryl Winn in 1982) then in 1983 a gold medal was introduced for the first lady home but it wasn’t until 1988 that gold medals were given to the first 3 women and in 1995 this was increased to the first 5 Women and eventually in 1998 gold medals went to the first 10 women home to match the number of gold medals earned by the men.

The Isavel Roche-Kelly medal was introduced in 2019 for any women who finished outside the top 10 but broke seven and a half hours. This in effect means that no woman can win a silver medal any longer with the very special medal now recognising the feats of the women.

There has twice been the debate as to whether a woman could earn a gold medal that would usually go to a man if she happened to finish in the top 10 overall. The first time this debate raged was in 1989 when Frith van der Merwe finished in 15th position overall and then again in 2019 when Gerda Steyn ran herself into the history books with her sub 6 on the Up Run and 17th position overall.

Whilst I use the word “overall” it’s actually incorrect as technically, Comrades is made up of two separate races, the men’s race and the women’s race which for the sake of convenience are run at the same time.

Most of the big city marathons around the world have two distinctly separate races but the time limit for Comrades and the hours of daylight on race day, makes that virtually impossible and possibly dangerous because of traffic, hence the two races being run together.

One very promising thing with the ladies is the improvement we’ve seen and are continuing to see in women’s running in South Africa, firstly that South African women are once again winning Comrades but also in the times being run, not only in Comrades but in standard marathons as well.

I have little doubt that the time will come when we see women in the top 10 overall at Comrades and I can only hope that the race organisers will have made it completely clear if that happens that there are two separate races and that 10 gold medals will go to the first 10 men even if more than one woman happens to beat one or more men and finishes in the overall top 10, but also gold medals to the top 10 women in their race.