Now that the dust has settled on the 90th Comrades Marathon in 2015, I thought it might be a good time to have a look back over the 60 years since my relationship with Comrades started on 31st May 1956. I haven’t been at all 60 races. I missed three of them but 2015 was the 57th time I have been at Comrades.

I have been fortunate to have done many things in Comrades over that time (except win it of course) beginning as a spectator, moving on to the job of second before the days of refreshment stations then to actually running the race 14 times and serving on the organising committee then I moved on to a radio journalist reporting on the race over 10 times for Radio 702 and also being fortunate enough to be able to present shows from the Expo. In this photo interviewing Andrew Hudson who at the time was opening bat for South Africa.

At the same time I was also stadium announcer and  also for a period in excess of 10 years. It was during the stadium announcing time and whilst working with TV man Arnie Geerdts, we decided that it was our job to get the crowds worked into a frenzy before each cut off.

Also during the time as stadium announcer I had the honour of meeting the Late Nelson Mandela whilst I was doing the prizegiving. That will go down as one of the really major moments in my life.

Now back to a spectator and in 2015 writing these blogs that I know some people have enjoyed and also tweeting non training tips that help in preparation and on race day and again more very positive feedback.

Does this mean that my relationship with Comrades is about to come to an end? There is no chance of that. The love I have for this “happening” is just far too strong for that to happen and as long I am able to stand upright, it’s my intention to be at Comrades.

So what is this blog all about? What I would like to do is to summarise in as short a post as possible the 60 years since I first met this race.

1956 and I met Comrades for the first time and the race was won by Gerald Walsh. I was immediately captivated by the whole event and remember that there were under 100 runners at the time.

1958, Jackie Mekler won his first of five Comrades. A childhood hero of mine and today I am proud to call him a friend. Such is this race.

1961 George Claasen, a headmaster from Middelburg in what is now Mpumalanga won the race against all odds. “Oom George” was the father of Springbok Captain, Wynand Claasen and in later years was very involved in road running and still has a marathon named after him in Centurion that’s usually one of the last Comrades Qualifiers.

1962 a team from The English Road Runners Club came to Comrades to run against a local team. Englishman John Smith won the race and apart from Jackie Mekler taking second place, the English took the remaining top places.

1965 saw the wettest Comrades in history. A very happy Englishman Bernard Gomersall is reported to “done a jig” when he saw the weather which suited him. He won the race easily. Interestingly in 1968 Gomersall came back again and was in a state of near exhaustion when he finished in 7th place.

1967 the drama year when Tommy Malone collapsed at the finish line and was beaten by one second by Manie Kuhn in what is the closest finish ever. Official times have it at one second but the general feeling is that with the sophisticated timing equipment we have today, the time would probably have been closer than one second.

1968 and Jackie Mekler won his fifth Comrades Marathon and I ran my first one. Around 600 runners and I finished in 320th position in a time of 10:25.

1969 and Dave Bagshaw won the first of his three successive wins. Going for his fourth win in 1972 Englishman, Mick Orton caused a major upset by beating Bagshaw.  Orton was part of the Tipton Harriers team that won the Gunga Din Trophy.

1975 and the Golden Jubilee race and for the first time the race was open to all runners within certain age limits and Betty Cavanagh was the first official woman’s winner of a Comrades medal.

The race that year was limited to 1500 runners because organisers were concerned that the roads couldn’t handle any more than that. 1975 a special year for me in that I ran my best time. A very modest 8:29 but a time of which I am proud.

1976 and a new hero on the scene. Alan Robb won the first of his four Comrades. Three in a row and then 1980 for the fourth win. Alan has now run over 40 Comrades.

Then came the 1980’s and Bruce Fordyce. Eight wins in eight years and one of the finest tacticians I think Comrades has ever seen. He ran his race and according to his plans and won. He also was a master mind games player and destroyed more than one runner who tried to de-throne him.

Bruce didn’t run in 1989, choosing instead to run an international although unofficial 100km race in Stellenbosch which he also won and this left the door open for a new winner and that was Sam Tshabalala, the first black winner of Comrades, who took the lead at Tollgate to upset the dreams of KZN favourite, Willie Mtolo who had to be content with second place. 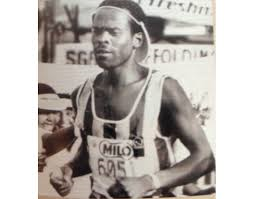 And another big happening in the 1989 Comrades was the amazing run by Frith van der Merwe who finished in 15th position overall to set a women’s race record of 5:54:43 that still stands after 26 years.

Bruce Fordyce was back again in 1990 to win his 9th Comrades and his last competitive race and then we moved into the 1990’s with start of the big foreign wave of winners.   1993 it was German, Charly Doll, 1994 the American Alberto Salazar who used a completely different strategy to that we had seen before when he basically went to the lead In Westville on the up run – and stayed there. Some felt (and I was one of them) that he was lucky not to have been caught by Nick Bester near the end. Bester was significantly stronger than the American.

A sprinkling of South African winners like Shaun Meiklejohn and Charl Mattheus but it was mainly time for the East Europeans and particularly the Russians who made the Comrades theirs for the better part of 10 years.

2000 was a big year for Comrades. The “Millenium Race” attracted around 24,000 runners, the largest field ever seen in Comrades and the time limit was extended to 12 hours to accommodate those hopefuls who wanted to be part of this amazing event. 2000 also saw Comrades with the only female Chairperson (she actually referred to herself as Chairman) in its history when the Late Alison West took the event into a new century.

The only multiple winner we have seen in the last 10 years has been Zimbabwean Stephen Muzhingi who managed a hat trick of wins in 2009, 2010 and 2011 and eventually the 90th Comrades in 2015 saw Gift Kelehe win and join big brother Andrew who won in 2001 to become the first brothers ever to have won Comrades.

There you have it, a summary of my 60 year relationship with this incredible “happening” called Comrades Marathon.