When entries opened for Comrades 2020 there was a crazy rush like we’ve never seen before and a complete sell-out of entries in under 3 days so now begins the hardest part of it all for the runners and that’s to get to that start-line in Pietermaritzburg on the 14th of June later this year.

For many – and there are a huge number of novices – this is going to be a new experience and sadly, many will get things completely wrong come Comrades day and they’ll have a long hot day out on the road and that could have been avoided had they trained correctly – but how does one do this?

Ask 5 different coaches or would-be coaches and you’ll probably get 5 different answers. One will tell you to do this and another will tell you to do that. One of the biggest secrets when you get yourself a coach is that these people generally know what they are doing (although I have come across a couple who don’t have a clue) so that being the case, when you think you’ve found the right coach, whatever you do – stick with that coach.

Jumping around from coach to coach is a disaster and won’t help you at all in the same way that taking advice from a dozen different people will have the same disastrous effect.

With more and more runners wanting to be able to tell the world that their running is improving, the demand for coaches to help runners get to that point, is increasing and no longer is it just the top or elite runners who are enlisting the services of a coach but the “ordinary” runner who is wanting to improve his or her time and doesn’t know how to go about this, is turning to coaches for help.

One of the latest coaches at the disposal of runners is “Team Ashworth Coaching”.   The name Ashworth is not an unknown one in the world of South African running and Ann Ashworth, winner on the 2018 Comrades is half the “Ashworth” part of this new coaching team.

Whilst Ann has been involved in coaching the runners in her club “Team Massmart” since the establishment of the club some two years ago, we’ve seen a huge improvement from many of the ladies who run for Massmart and that’s where Ann will continue to focus, it is husband, David, who has given up his job as a teacher to coach fulltime.

David has been coaching for a couple of years on a low key basis and has had success with some of those he’s coached but his credentials need to be known. A green number runner at Comrades (he got his green number in 2019) with a best Comrades time of 6:24 in 2018 and a best marathon time of 2:31, David certainly knows what he’s talking about.

David Ashworth gets his Green Number from the late Jackie Mekler

I sat down with David Ashworth to find out more about the new “Team Ashworth Coaching”.

DJ:      Whilst you call yourselves “Team Ashworth Coaching”, as I understand it, you’ll be doing most of the coaching of runners needing a coach whilst Ann continues to focus mainly on the ladies of “Team Massmart” and her career as an advocate with very little in the way of general coaching?

DA:     Because Ann is very involved in her work as an advocate and administration of Team Massmart, I have taken over as the official coach of Team Massmart, coaching a number of the ladies there. I am fortunate to be working with an amazing team of elite ladies such as Lizzy Ramadamitja, the first black South African female to achieve a gold medal in 9 years at last year’s Two Oceans Marathon. 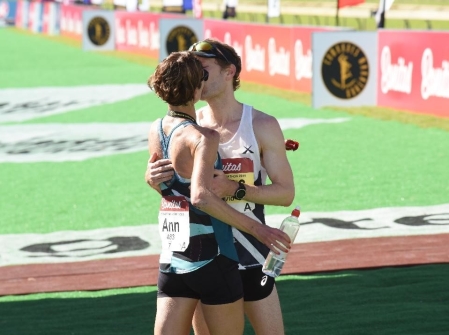 Ann & David at the finish line of Comrades and both under 6:30

DJ:      Will she be involved with the elite ladies at Massmart?

DA:     There are basically three categories of athletes at Massmart. You’ve got the “Elites” the “Sub-Elites” and the “Development” athletes who can’t afford to get into running seriously and those are coached at no cost to them. That’s where Ann gives back to running in a big way. She doesn’t go out and get athletes who are already performing or poach from existing clubs, but instead, goes out and finds talented athletes who do not have the means to take their running to the next level. Ann recently took on 10 ordinary athletes who do not have the means or support to reach their dream of running the Comrades marathon.

DJ:      What qualifies you as a coach? There are some that I know of who simply set themselves up and don’t actually know what they are doing despite telling the world that they do.

DA:     I’ve learnt from a number of top coaches over the years and I’ve learnt a lot of different coaching styles from them, people like Andrew Bosch, Lungile Bikwani, John Hamlett, Lindsey Parry and Neville Beeton and then as far as the academic side of it is concerned, I’ve done ASA Level 1 coaching, Sports Science Institute: Training essentials and programme design for endurance running, Sports Science Institute: Cycling Science – The essentials of cycling physiology and coaching,

Also, as part of my B.Ed Degree studies, I sub-majored in Physical Education. This included training, coaching, and physiology,

and I’ve done a lot of research and a lot of reading on coaching and coaching methods so I’ve covered a fair amount of coaching training.

DJ:      From the things you’ve picked up from these various coaches and courses, have you developed your own coaching methods and do you stick with that for all your athletes?

DA:     There isn’t one coaching method for everyone so it follows then that, it differs for every athlete. Training must fit into the lifestyle of that particular runner. Some athletes do better on high mileage whilst others do better on low mileage so we have to factor this in when designing a programme. An athlete should stick with one coach for some time so that as a team, they can find out what works and what does not work for them. Simply put, there’s no “one size fits all” and each athlete gets a unique plan.

DJ:      Let’s assume I come to you with a marathon time of 4 hours, or a Comrades time of 10:15 so I am really towards the back of the field and I would really like to improve on that. Firstly would you take that sort of person and secondly, what do you think a runner of that calibre could get to? I would think that a sub 3 hour marathon is pretty much out of the question as is a silver at Comrades. How do you establish a person’s limit?

DA:     To answer your first question; I assist athletes who have only started running, all the way up to elite level. Second, you’ve got to be realistic about what that person wants to achieve and you can only do that over a period of time. There isn’t a set pattern for everybody so it’s a case of looking carefully at individual performances and guiding that person to their reach their goal. A coach should not place a limit on an athlete, however, realistic goal setting in collaboration with the athlete to reign in an over-enthusiastic expectation is sometimes necessary. A 4-hour marathoner can achieve a sub-3 time. Many factors must be considered: age, weight, how long they have been running, and so much more will all contribute to their potential ability.

DJ:      I remember that when I ran my best Comrades in 1975, it was 8:29 and to this day I firmly believe that 8 hours was my limit. What would you have done to get me – perhaps – to 8 the hours that I so desperately wanted but never achieved?

DA:     I would have looked at your existing training programme to establish what, if any, periodization there was. I would look at how you progressively build up the mileage and see what Comrades-specific training sessions were incorporated (keep in mind that the ‘up’ and the ‘down’ runs are completely different races). I’d also look at your recovery – the key to a successful training strategy is having sufficient rest and recovery.

DJ:      So I want to run Comrades this year. I have already qualified at Kaapsehoop and I did 3:55 which is Batch D at the start and that’s not too bad but I do want to get to Batch C where I would really like to be and out of the masses at the start? Do you work on my speed or my strength and endurance to get me to Batch C?

DA:     I would focus on both speed and endurance. I would also prefer to do the qualifying marathon on a flat course rather than a downhill course like Kaapsehoop. I think it’s not great to use a downhill route for a fast time because of the damage you do to your muscles and joints. I would also exercise caution against putting too much emphasis on racing too close to Comrades. You may find that you run a pretty good time in a situation where you are relaxed and not trying to run so hard.

DJ:      It’s no secret that I am a big exponent of LSD (Long Slow Distance) and whilst I may not have been the fastest runner back then I always had plenty of reserve for that dreaded second half and I firmly believe that came from my LSD. You views on LSD?

DA:     LSD should be present in every runner’s training. The latest research by Dr. Stephen Seiler reveals that polarized training carries huge benefits in one’s training. Polarized training is similar to 80/20 training in which 80% of running is done at extremely low effort and only 20% at maximal. It won’t make you a slow runner as people are lead to believe. What it does is it saves you from being fatigued on the fast and hard training sessions.

The basic concept has been followed by the Kenyans, cross-country skiers, rowers etc. It’s VERY difficult for the average runner to train this way. The ‘easy’ runs that most follow are not easy enough and have a huge negative effect on the body. They’re not fast enough to get the benefit of a speed session, but are too slow for a quality session. It is a kind of no-man’s land. So, to answer your question… I know that most get it completely wrong.

DJ:      Explain what you mean by that because you seem to have two differing views on the subject where you say “It’s VERY difficult for the average runner to train this way. The ‘easy’ runs that most follow are not easy enough and have a huge negative effect on the body. It’s not fast enough and is too slow for a quality session” so what is the best speed at which to train and do you work on that with your runners?

So there you have it if you’re looking for a coach to help you get to the finish on “the big day” in mid-June in the best possible shape, take a look at the Team Ashworth Coaching website at www.teamashworth.co.za and you’ll get all the information you need as well as different coaching options and costs.

Train well – and see you in Durban and don’t forget the other part of your training where you focus on getting to know the route for the Down Run. That’s essential. You’ll find that on COMRADES DOWN RUN ROUTE 2020

BEATEN BY A WAR AND A PANDEMIC »
« VERY SPECIAL COMRADES FEATS