It’s important to understand that this article is not aimed at the people who are in line for a gold or even a silver medal at Comrades.  I have said many times that never having been in those exalted positions, I am not qualified to comment on or give advice to those runners.

I have just read a very good article written by Bruce Fordyce about the fact that April is the most crucial training month for Comrades and I totally agree.

Bruce on the way to one of his wins

I dug out my own logbook from days gone by and every April was my big distance month – and it paid off.  The year I ran my best – and remember that my best was only 8:29 (so hardly a threat to the winner), I did two runs over 60km and one over 50 in April and then another of just under 60km in the first weekend of May.  I have always been a firm believer in LSD.

But what exactly is LSD?  It stands for Long Slow Distance and not the stuff that was freely available at Woodstock in 1969!  So what is “Long” and what speed is “Slow”?

A lot of runners these days regard a 20km or a 25km as LSD and sometimes even as little as 15km!  I don’t think that’s LSD and neither do some of the runners who should know about these things.  In his article to which I referred at the start, Bruce Fordyce says that a “long run” should be between 40 and 70km.  I asked Bruce what he considers as being the speed that an average “slower runner” should be doing in a race that is being treated as a training run and we fully understand that many Comrades runners take part in races during April and May for a variety of very valid reasons.  Bruce tells me that he thinks those runs should be an hour slower than race pace and then it’s a training run and as Bruce says “It’s about time on your feet in April”. So if you are a 4 hour runner for the marathon, do the 42kms in close to 5 hours.

If you’re a 4:45 runner in a marathon, it would be difficult to slow down by an hour in a race over a distance of 42km so listen then, to the advice from Ann Ashworth the 2018 Women’s Comrades Champ, about the speed she suggests for a good training speed in April. 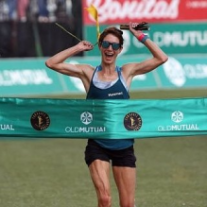 She told me that she tells her athletes to “run at conversational speed, in other words they must be able to hold a normal conversation throughout the run”.  This is great advice because it covers any runner at any speed ability. What Ann is saying is that if you are battling to talk in normal conversation terms, you are running too fast for a training run!

Ann tells me that she thinks the right thing is about 3 (or maybe even 4) runs of 50km to 60km in a Comrades build up in April.

When I think back the “conversational runs” were pretty much the way I ran in all my long training runs. They were considerably slower than my race pace, we didn’t bother with the time it took us and the group I was running with, chatted, laughed and joked the entire way. Some of the jokes had been told before but we laughed again anyway!  I remember doing training runs on the Comrades route from Pietermaritzburg to Pinetown which is around 65km and taking around 8 hours to do them depending on seconding stops and that sort of thing.

We certainly weren’t in any hurry but you have no idea what a boost those long runs gave me. It meant firstly that my legs could do that distance so they were taken care of for Comrades day because I have always said that if your legs can do 60 or 65kms they can certainly do the 87km needed for Comrades this year.

It also gave me a huge mental boost knowing that I could do the distance without any stress and I could go into Comrades knowing that barring any major problem I would have no trouble getting to the finish in the 11 hours we had available back then and if I did have a major problem as happened in 1976, I still had time.  1976 was a shocker for me with severe cramp from before half way but I still managed 10:06.

It’s important to remember that I was never a top runner in my Comrades running years but I started 14 of them and finished 14 of them and didn’t need medical attention at the finish of any of them, and that included the 1971 Comrades that we’re told was the longest Comrades of them all where I finished in under 10 hours despite the fact that I was forced to walk the last 20 km because I had ITB in the days before we knew what ITB was!  That walk of the last 20km wasn’t a physical thing at all.  It couldn’t be because my knee was wrecked.  The LSD training kicked in when the “90% of Comrades is above the neck” part had to take over.  On that day in 1971 it certainly did.

A short while ago, I read a training tip by Comrades coach Lindsey Parry where he advised that if you have Comrades in mind that you shouldn’t be racing any marathons or ultras from now to Comrades and there are a few of both categories on the calendar.

What he said was “No more racing. This applies to marathons and ultras. They should not be raced and you don’t want to be chasing seeding in your peak training block. For those who need to qualify, you should aim to run at the minimum possible effort to qualify and use the race as a training run.”   Sadly many runners will ignore that very sound advice.

So what is LSD during the month of April that is so important to get into your legs and to spend time on your feet?

I think that depends to a large degree on individual runners and the times you are able to run in Comrades but one thing I do know is that LSD is not 15km or 20km or even 25km as some runners think.  Don’t think that running three or four half marathons in April and nothing much more is going to make your Comrades day easier. I don’t believe it will.  It may get you to the finish but it will in all probability also get you a visit to the medical tent at the finish.  In chatting to the man who heads the medical facilities at Comrades, Jeremy Boulter, he tells me that the majority of those needing attention in the medical facilities at the end, finish in the last two hours of the race and in most cases are undertrained.

I’ve been on the road in recent years and seen the looks on the faces of the runners in the “Rescue Busses”.  They might have avoided the medical tent at the finish but they have also avoided that precious Comrades medal and in many cases (not all I agree) that’s as a result of inadequate training.

In the article that Bruce wrote and to which I referred at the start he says the thinking behind long runs, is that they build the stamina, endurance and strength that is so essential for Comrades and I agree with him.  I doubt that you can do that on 20km or 25km runs alone.  In my running days I did the long training runs to build my stamina, endurance and strength – both physical and mental and it worked – 14 times!

The important thing to understand is that we don’t all have the ability of a gold medallist or even a silver medallist if we are the average runner and that one should therefore, aim to do whatever is within your ability for your own LSD runs.  I know that when I was running long runs at the weekend, I would never do more than one long run over a weekend.  I knew my limitations.  Some people have said that had I done two long runs over the same weekend, my times would have been a lot better but I don’t think so.  I wasn’t built to do that sort of running and I’m not convinced that back to back runs over a weekend for the average runner is a great idea anyway, but that’s my opinion.

So bottom line is that April is the biggest distance month in the build up to Comrades. It’s not a good idea to race any marathon or ultra but instead treat them as training runs.

It’s not too late to get those long runs in for Comrades. Do them this month and you won’t regret it. Most people running Comrades this year have a 42km under their belt already as a qualifier so to run three or four long runs in April shouldn’t be a problem.