A little over 50 years ago, shortly before I ran my first Comrades, I read an article in a Durban newspaper entitled “Comrades – The Great Leveller” and over the years since then, I have often thought about that article as various things have happened during this race.  I have seen race leaders with a substantial lead just 20km from the finish end up just scraping into the gold medals or not finishing at all and I wonder how many people, both runners and spectators have ever thought about the subject of that article?

A couple of years ago, Comrades themselves used the theme “It Will Humble You” and I wrote something at the time in which I expressed my thoughts about how this event can in fact humble one.

I am just one of those who has been humbled by this race on more than one occasion but the biggest lesson I got was in 1976 when I was going for my best time. I had trained for it and I knew I could do it but just a few minutes over 3 hours into the race I ran into trouble in the form of cramp.

Prior to that I had never suffered from cramp (as opposed to sore and stiff muscles) while running and this was my 9th Comrades so there was absolutely no reason for it to have happened that day – but it did and I ended up running just over two hours slower than I had planned, and my second half was slower than the winner that year (it was Alan Robb who won in 5:40:39) took to run the entire race. 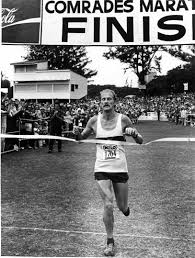 If that is not being humbled I don’t know what is and I know of many runners who can tell you stories of how they “came undone” in Comrades and ended up either not finishing or having serious problems on the road and finishing a lot slower than they had planned.

I could rattle off a long list of names but I won’t because it doesn’t take a lot of thought to go back through the history of Comrades and to find many of the people who have suffered the indignity of being humbled by this road race.

Comrades is bigger than any of us when that gun is fired to start the race.

So back to where I started when I said that Comrades can be regarded as the great leveller but what exactly does that mean?

Well, as I see it, and this can be seen almost every year when Comrades organisers take the number of people who have entered and publish the jobs and professions of the runners and how many people fall into each category and you’ll find some of the entrants are company directors or well-known surgeons or some other equally elevated profession many of which come with a reasonably high social status.

At the other end of the scale, you find manual labourers, waiters and, sadly, unemployed people but the big thing is that when that gun fires to start Comrades, every one of those people are equal and their position in life and the amount of money they have and their fame mean absolutely nothing.

On the road between Pietermaritzburg and Durban, the top surgeon in the country, if he’s running, could find himself spending many hours running alongside, talking to and bonding with the lowest paid person in the race and what they are in life and the status they might have means nothing at all. Not a thing and in many cases it’s probably unlikely that they’ll even bother to ask each other about their status in life. They have far more important things to think about on Comrades day. 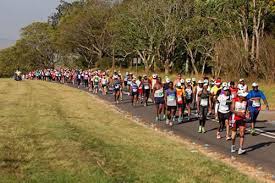 They are all exactly the same as they struggle together up the hills in Comrades and as they share their thoughts about the race and stop together at a refreshment station for that well deserved drink.

So basically what I am getting at, is that it matters not what position or so-called social status you may hold in life or how much money you might have in the bank and how fancy a house you might live in and how expensive a car you might drive, all those things mean nothing.  On Comrades day everybody is equal where all your wealth and status, or perceived lack of it, count for nothing.

Go to the finish or even sit at the side of the road to watch the race and watch the runners and nobody asks them how much or how little they earn when they offer to help each other to reach their goal. Those runners are simply “comrades” together on that day.

Imagine what a wonderful place South Africa would be if everybody in the country behaved towards each other in the same way as they do on Comrades day.

I don’t think it matters whether you’re a gold medallist or whether you scrape home just before the 12 hour gun, on Comrades day I believe everyone is equal and I think it can best be summed up by Caroline Wostmann who won the women’s race in 2015 and had that awful run in 2016 and although she finished second, something that many people would be happy to do, she said   “When I crossed the finish line I learnt that winning is not about coming first but rather about challenging yourself to the limit, pushing the boundaries and walking away from the experience a better, stronger person.”

Every runner has the same distance to cover, the same hills to climb, the same refreshment stations to use and the same stiff and sore legs.  It matters not one bit who or what you are on Comrades day or what colour skin you might have because every single person in that race (and I’m not talking about athletic ability here) is exactly the same.

There’s no doubt in my mind that Comrades is the great leveller.

2 thoughts on “COMRADES – THE GREAT LEVELLER :”